City Theater is proud to be not only an historic landmark, but also a vital anchor of the growing arts and cultural community in Biddeford-Saco as a year-round performing arts venue. 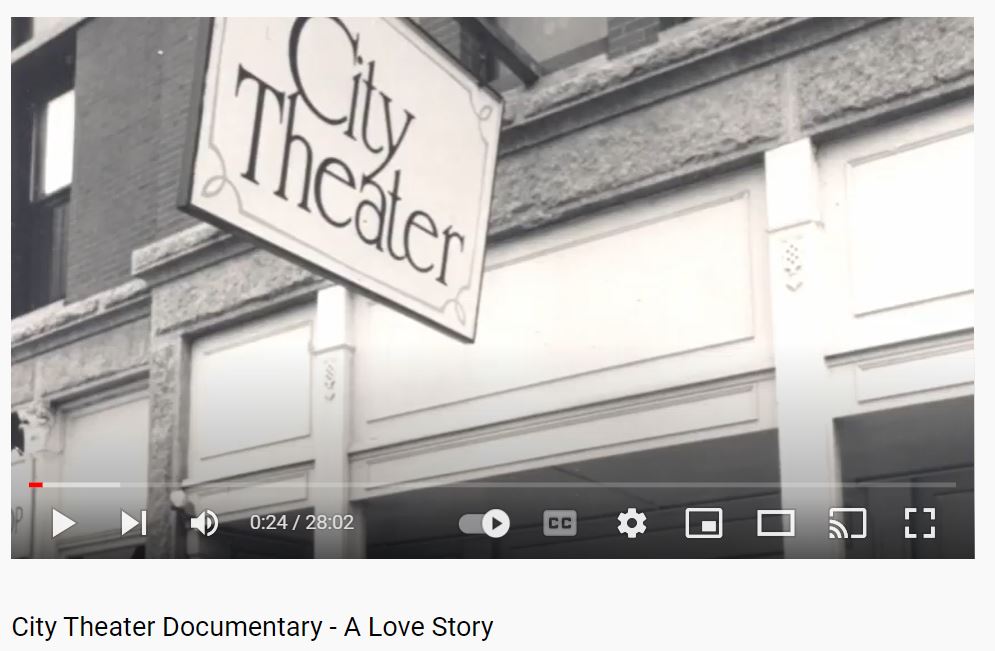 To celebrate the 125th Anniversary of City Theater, we created a special documentary: “City Theater: A Love Story” highlighting the extraordinary history of this magnificent performing arts venue. Special thanks to Charlie Cole, Ben Keller, and Linda Sturdivant for making this documentary possible.

The City of Biddeford purchased land in the late 1840s at the corner of Adams and Main Streets, and at that site planned the first building exclusively for the city government. It was to house all municipal offices, as well as the original opera house. The opera house opened in October 1860 with a play depicting slavery in the Southern states – appropriate on the eve of the Civil War. An era of theatrical history began for the city of Biddeford. Edwin Booth, Joseph Jefferson, and Pat Rooney appeared over the years before appreciative audiences.

On December 30, 1894, a raging fire destroyed the entire city building. An emergency city council meeting was called for on Jan. 2, 1895. From that initial session until the final architectural designs were completed, the question of whether or not to rebuild the opera house was hotly debated. Finally, the dispute over building a performance arts center was settled in favor of the arts, and the planning of a larger and more structurally sound facility was initiated. Maine architect, John Calvin Stevens, designed a richly ornamented opera house in the colonial revival style, complete with horseshoe balcony. A large brass chandelier with glass shades showcased the stenciled ceilings. 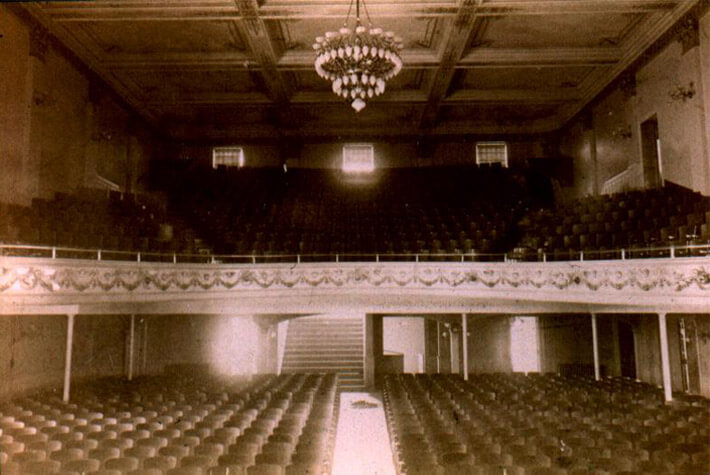 The rebuilt opera house reopened January 20th, 1896 and quickly resumed its role as a cultural focal point in York County. A favorite among audiences was vaudeville, with Biddeford as an important stop on its circuit. Dramatic performances by stage immortals like the Barrymores, along with minstrel shows, community pageants and plays were popular offerings. Local director and actor J.J. Salvas entertained audiences with his portrayal of various characters. Illustrated songs were also well-liked. One such performance ended tragically and remains a part of City Theater’s folklore. On Halloween Eve, 1904 singer Eva Gray collapsed and died after her third encore of the song “Goodbye, Little Girl, Goodbye”. The beautiful 33 year old died backstage from heart failure with her 3 year old daughter present. Many since have referred to Eva as the theater’s resident “ghost”. 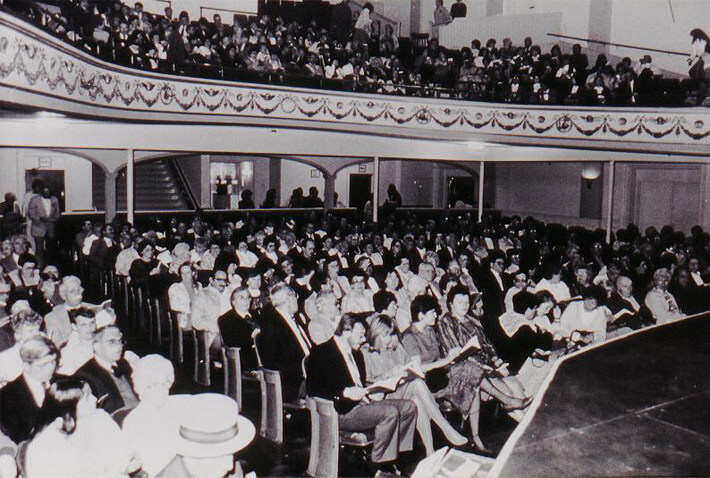 Soon films began to gain popularity, and when talkies were introduced in 1928, live theater
was nearly eclipsed. The opera house became a movie house in the 1930’s. The grand days of vaudeville were over except for the occasional appearance of an act between films.
Renamed City Theater in 1955, interior improvements were started. The lobby and its staircase were paneled, new poster display cases were built along with a projection booth, and a permanent cinemascope screen was put in place. The transition from opera house to Movie Theater was neither easy nor graceful.

Television and drive-ins won the battle over movie houses and in 1963 City Theater closed. From 1971-74 it was used as a storage facility for the city. Ironically in 1973 City Theater, as part of Biddeford City Hall, was recognized and listed as a Historical Landmark with the National Trust. That being said, in 1975 a load of sand was dumped in the middle of the venerable old facility, turning the orchestra pit into a horseshoe pit, but not everyone thought the theater should suffer this fate. 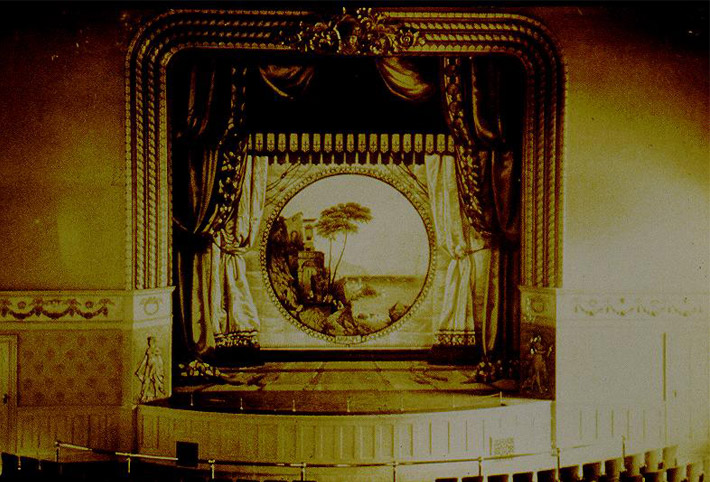 In 1977 the newly incorporated City Theater Associates began a move to reopen City Theater.
Through a lot of hard work and community volunteerism, the theater reopened in 1978 with the internationally acclaimed Norman Luboff Choir. The theater received a face lift, but was still in dire need of upgrades and restoration. The public supported the theater and attendance grew as plays, musicals, concerts, dance recitals, and community events graced the stage.

In 1996 the theater celebrated its 100th year anniversary and was awarded a gift of new seats from the city of Biddeford. Soon a combination of funding received from federal, state, municipal, private, and business sources put restoration efforts into full motion. The highlights of this effort include a new marquee along with restored and reproduced stenciling on the theater’s lobby walls, house walls, and ceiling. The theater also received modern updates to its lighting and sound system, a digital projector and the installation of a new heating and air conditioning system. 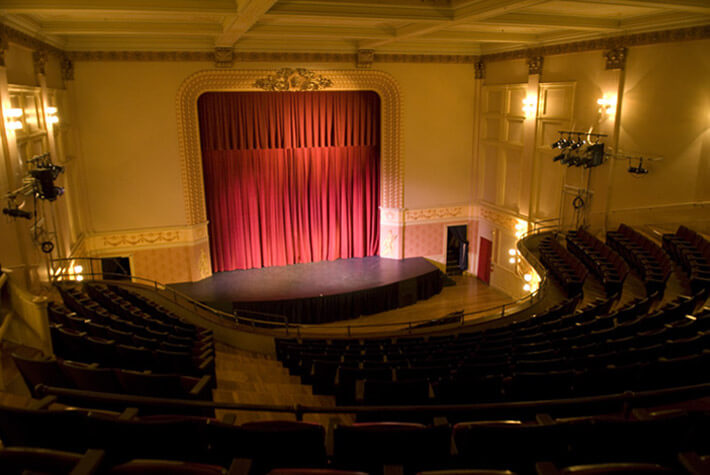 Historical buildings demand constant maintenance and the upgrades continue. Today, efforts are underway to re-point exterior brickwork, along with making necessary upgrades to the fly system (most of the pulleys and pin rail area above the stage are original), stage floor, costume room, and public restrooms.

Thanks to our Season Sponsors